Elon Musk is many things. Wikipedia describes him as "business magnate, investor, engineer, and inventor." His Forbes profile adds "billionaire" and even "powerful person" to the list. Others would describe him as "visionary," while still others would say "environmentalist." Rarely, however, have I heard Elon Musk described as a retailer.

So it may come as a surprise then that, despite his lack of a retail reputation, I nonetheless feel compelled to look to Elon for retail advice.

In fact, I would suggest that he has taught retail many things, beginning as early as 2008, when Tesla "stores" (not showrooms) reinvented the car buying experience. These engaging and interactive stores featured coffee bars, WiFi, personable product specialists, and an open service bay to allow people to view Tesla technicians at work. And these stores quickly became an example for what shoppers could expect from any store experience, whether shopping for a Tesla or a television.

Time to Cruise the Mall

The 2011 opening of a store in San Jose, California, brought Elon Musk's stores to, where else, but the mall. These new mall stores maintained the same shopping ethos as the original stores, but had the added benefit of exposing the brand to much more foot traffic. They included numerous opportunities for both physical and digital exploration. Large touchscreens presented Tesla Stories that highlighted Roadster experiences from Tesla owners. Other screens presented Tesla Innovations and Tesla Design Studio, where you could configure – and of course purchase – your Roadster.

He also revolutionized post-sale service as well. Many Tesla "repairs" can be implemented through upgrades delivered via the internet, or via his revolutionary fleet of Tesla Rangers. Once Elon discovered that the vast majority of repair requests do not require the use of a lift, he implemented his Rangers program to make house calls to repair your car.

And then, last week happened. I'm sure you saw the news. Elon Musk, inventor, entrepreneur and investor, pulled off what just may be the greatest product drop in the short but glamorous history of product drops. Only three weeks ago, I wrote a blog post extolling the virtues of the latest wave of retail product drops. I explained how effectively executed drop events could be leveraged to deliver store experiences modern shoppers crave. Heck, I effusively praised Barney's for their two-day product drop extravaganza. I lauded their 80 exclusive drops and related activities that brought engagement to shoppers on each of their eight floors.

Elon Musk Pulls a Fast One

And then Elon did it again, and in so doing he has forced me to re-evaluate my very recently formed point of view on product drops.

So what, exactly, did he do this time?

He invited hundreds of trucking industry executives and Tesla owners to a SpaceX hanger near Los Angeles. People arrived at the event expecting to witness the premier of Tesla Semi, Elon's new electric semi-truck. They expected to witness the  Semi's interior. They expected to learn how it could haul a full load over 500 miles on a single charge. And while he did, in fact, launch the Semi at the event, Elon had another trick up his sleeve...

As he concluded his remarks touting the Semi, the back of the truck opened and dramatic music began to play. Slowly, tantalizingly, his chief designer drove a shiny new addition to the Tesla lineup out of the back of the Semi. And then he hit the gas pedal and literally darted away from the crowd.

Because you see this car wasn't just an upgrade to one of the models in their existing assortment. The car that rolled off the back of that semi-truck was a brand-new Roadster. The world's fastest production car. An electric car that goes from 0 to 60 mph in less than two seconds. An electric car that has a 600-mile range...on a single charge. Want to get to 100 mph? Better be patient. Elon's new addition will take a whopping 4.2 seconds to get you to triple digits.

And - just like that - Elon Musk raised the bar for every product drop going forward. 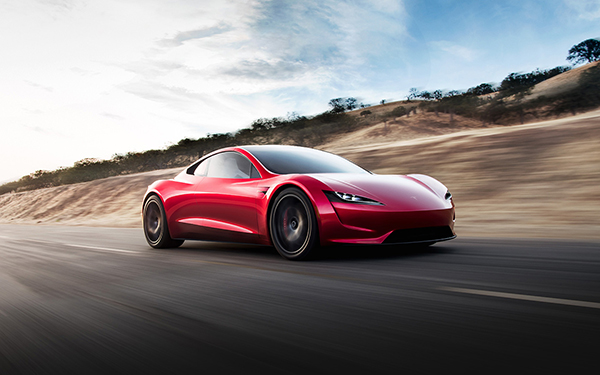 The latest (electric!) Tesla Roadster reaches 60 mph in 1.9 seconds and has a range of 610 miles[/caption]

According to numerous reports like this one from TechCrunch, the live audience was awestruck: "Understandably, the crowd was in awe when Musk revealed the new Roadster."

In addition to those who attended the live event , it seems much of the internet was in awe, as well. Just five short days after the launch, a Google search for "Tesla Roadster November 2017" returned 1,710,000 results. Social media blew up with the news, too.

Now, I know not everybody has groundbreaking $200,000 sports cars just sitting in a warehouse waiting to be dropped. Regardless, it's clear that Elon gets it. He understands how important it is to continually look to surprise, inspire and delight his customers. Will many people actually purchase this exciting car (and yes, there is already an online reservation page just waiting for you to sign up and drop a deposit of a mere $50,000)? Probably not too many, no.

But perhaps there is a better question for retail. Will many people, excited and inspired by last week's drop, be more likely to consider another, more affordable option, in the Tesla lineup next time they are in the market for a new car?

Probably many, many more.

TXT Retail Acquisition One Year Later: A Lasting Legacy and Bidding Farewell to a Brand

Assortment Planning – Why Now is the Time to Renovate

Are Product Drops the Antidote to Our Completely Commoditized Culture?